Entangled Teen
Opposition is the fifth and final book in the Lux Series written by Jennifer L. Armentrout.

Katy knows the world changed the night the Luxen came

She can't believe Daemon welcomed his race or stood by as his kind threatened to obliterate every last human and hybrid on Earth. But the lines between good and bad have blurred, and love has become an emotion that could destroy her—could destroy them all.

Daemon will do anything to save those he loves, even if it means betrayal.

They must team with an unlikely enemy if there is any chance of surviving the invasion. But when it quickly becomes impossible to tell friend from foe, and the world is crumbling around them, they may lose everything— even what they cherish most—to ensure the survival of their friends…and mankind.

War has come to Earth. And no matter the outcome, the future will never be the same for those left standing.

Daemon, Dawson and Dee disappear with the Luxen newly arrived on Earth. Katy, Beth, Luc and Archer wait for them to come back, although Luc and Archer do not really believe they will and just hold out to see what happens next. While waiting, Katy learns that Beth is pregnant.

Katy and Archer go to the grocery store to pick up supplies. At that moment, a band of Luxen attacks the store. They kill humans in the store and take their form. Katy tries to help a little girl and draws the attention of the Luxen towards them. Katy and Archer manage to open an escape route. However, just as they are leaving the building, she feels the familiar tingle in her neck and thinks that Daemon is somewhere near. She turns around and faces not Daemon, but his twin brother Dawson. Dawson knocks her out.

Daemon is angry with Dawson for bringing Katy to the Luxen hideout. We learn that the leader of the new Luxen, Rolland, and his right hand, Sadi, control Dee's mind, partly control Dawson, and can occasionally read Daemon's mind. However, the three siblings were able to hide Beth's existence.

Daemon cannot resist going to see Katy. He heals her and leaves. Later, Katy is brought before Rolland. Daemon is present, but remains cold and distant despite Katy's pleading. He even holds her in place when a Luxen examines her (he is said to be curious). However, Daemon loses it when the Luxen touches Katy's breasts and fights the Luxen named Quincy. He claims it is only because she belongs to him and that he only wants her physically. Rolland is suspicious, but accepts his explanation. Daemon gets to speak to Katy and explain the situation by pretending he just wants to sleep with her when another Luxen intrudes. The Luxen informs Daemon and Katy that they are to accompany Rolland to a press conference the next morning.

The next morning on the way to the press conference. Katy has to ride with Sadi and Rolland, while Daemon and Dawson get assigned to another car. During the ride, Katy learns that Sadi is not a Luxen, but an Origins, and has been reading all their thoughts. They tell her that they are planning to kill Daemon and Dawson as a warning to all other Luxen who sympathize with humans. Katy is able to make the car spin out of control and free herself. However, they are quickly surrounded by Luxen. In the end, it is Nancy Husher who bails them out. Dee, still under the influence of the new Luxen, flees with them.

They are brought to a military base and it turns out that Nancy was forced by Luc to save Daemon, Kat and the others. They also learn that Daedalus had been dismantled after the government learnt what they had done to the Luxen and Origins. The general in command asks them to come to the control room when they drop the first electromagnetic pulse bomb over Los Angeles which has been taken over by the new Luxen. The bomb kills all Luxen, Hybrids and Origins (good and bad) in the area, but also a lot of humans (people with heart conditions or whose lives depend on electric devices which are also destroyed by the bomb). The general doesn't do this light-heartedly, but he says it is the only weapon they have and he will use it against other cities taken over by the Luxen. Daemon has the idea of bringing in the Arum, the "natural predators" of the Luxen. He knows that the new Luxen have no experience in fighting the Arum, and this would be a more targeted approach (less civilian loss). The general agrees to give them six days to try and come up with an Arum army. After that he will do what he has to do.

Katy, Daemon and Archer go to find Hunter, who brings them to the Arum leader Lotho. After a showdown with Daemon, he says he is willing to give them an army if Daemon lets him feed on Katy. He promises not to kill her. Daemon flatly refuses, but Katy convinces him that it is their only chance to save millions of lives. Daemon insists that he wants to be present, but he loses it when Lotho leans over Kat. Lotho pins him against the wall easily... and laughs his head off. He just wanted to mess with them and see how far they were willing to go.

When they come out of the Arum hideout, they learn that Nancy has gone missing. Hunter and his brother Lore invite them to rest at their place for a while. While the Arum are gone shopping, the Luxen attack. Dee is among them and tries to kill them. Katy fends her off while reminding her of their common past. Finally, Dee breaks down crying and becomes herself again.

Dee tells them that Ethan White, the leader of the Luxen colony near Katy's and Daemon's home, is also the ringleader of the Luxen invasion. Since he has experience with the Arum, they fear that he might go into hiding and continue working towards the overthrow of the human government. So, they decide to go home, pretending that they are still under the spell of the Luxen.

When they get home, Katy runs to see her mom. But it is not her mother waiting for her, but a new Luxen, who has assimilated her mother's DNA. Daemon kills the new Luxen and Katy breaks down, overcome with grief. Before they can clear out of there, Ethan arrives. He admits that he is behind the invasion and that he did it to take revenge for what "the humans" did to him in Daedalus. An army special task force comes in, but it is Katy who kills Ethan. They then go out to fight the Luxen. Katy is lured back to the colony by an Origin, where thousands more Luxen are waiting, Daemon at her heels. Katy and Daemon think that this is the end, but at this moment the Arum arrive.

Katy and Daemon leave the scene, having seen enough cruelty for one day. The next morning, Katy goes out after breakfast to have a little time to herself. Daemon learns that Nancy has been seen nearby. He goes to find Katy. At this moment, Nancy shows up behind them, a modified PEP weapon in her hand. She is dead set on taking revenge on Daemon by killing Katy, but Daemon steps in the line of fire. He and Katy go down and the last thing they realize before they slip into unconsciousness is that Dee takes out Nancy.

Katy is sure she has lost Daemon forever, but when she awakens in a military hospital, he is in the bed next to her. There is no real explanation, but that he "hung on".

The epilogue is set 11 months later. Things are slowly going back to normal, at least as normal as they can get with 2 Luxen-Hybrid couples, 1 Luxen-Origin couple, a regular Origin, and a baby origin.

There are 25 chapters and an Epilogue. The story is told from both Katy's and Daemon's point of view. 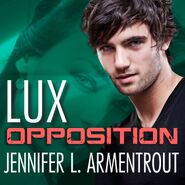